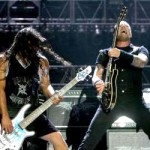 Update: Sonisphere 2010 review here The two-day music festival at the stately Knebworth house gardens came to a close yesterday with Metallica headlining the Sunday night. Sonisphere 09 was the first of what is said to be an annual event with this years lineup being very metal orientated. The organisers are adamant that it’s a “rock” festival and not a “metal” festival however, rumours have emerged that Iron Maiden are booked for next year.

Saturday’s line up featured the likes of Anthrax, Heaven and Hell, and Bullet for my Valentine. Rain seemed to dampen the Sonisphere vibe a bit on Saturday afternoon but by the evening things had cleared up for Linkin Park whose singer, Chester Bennington in a rather odd move brought on his slightly weak sounding side project to play a few songs.

Sunday promised to be the superior day for most in terms of weather and music with Killing Joke pulling out some old favourites and on the Saturn stage Mastodon and Alice In Chains both giving us brilliant performances. The Apollo stage was set for Lamb of God and Machine Head, who had originally pulled out after finding out they had been pushed down the bill by Limp Bizkit who wore a Machine Head T-Shirt seemingly as a peace token. 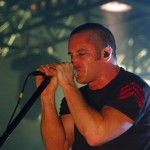 Nine Inch Nails divided the crowd after playing a dreamy set which catered for the more die-hard NIN fans but finished their daylight set 10mins early. NIN’s vocalist, Trent Reznor said “We played a purposely quiet, intimate set. I figured it would either enrage or baffle the metal audience…” It did, but in a good way.

Metallica finished off with a two hour set mixing up the old and new to a backdrop of pyrotechnics.

Great bands and great location makes this one to check out next year.