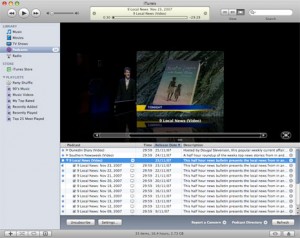 Last week, Apple released its ninth major version of iTunes — which first came out in January, 2001, before the iPod even existed — and I’ve been testing it. This release is the biggest overhaul of the familiar program in recent years, with improvements in the look and functionality of each of the software’s three main portions: the media jukebox, the built-in store and the synchronization features that move media and applications to and from iPods and iPhones.

In my tests, performed on multiple Windows PCs and Macs, iTunes 9 worked as advertised, and I found it to be less cluttered, more intelligent and easier to use than the prior version. It synced music and videos properly for me using both an iPod Nano and an iPhone. It’s available as a free download at apple.com/itunes.

To me, the two biggest new features in iTunes 9 are something called Home Sharing and a new, easier way to organize the apps on an iPhone or iPod Touch.

For years, iTunes users have been able to wirelessly stream music from nearby computers running iTunes whose owners chose to share their music. But Home Sharing takes this one step further, allowing users to actually copy the song files from one computer to another.

Right inside iTunes, you can simply peer into the shared library on another computer set up to allow this, and then select the song you want and drag it into your own library. It doesn’t delete the original from the other computer.

In my tests, this worked perfectly with music, as well as TV shows, movies and audiobooks, and it worked between any combination of my PCs and Macs. You can even configure Home Sharing to automatically transfer to your library new media purchased on another shared computer.

But Home Sharing has limitations. It only works with a maximum of five computers. These computers must be on the same local network, not connected over the Internet. And they must be the same computers authorized to play copy-protected media you buy from Apple.

With 75,000 apps available for the iPhone and iPod Touch, it has been easy to download so many that your device becomes cluttered, with numerous icons scattered among numerous screens in a manner that isn’t optimal. There’s a way to move them around, or delete them, right on the device, but it’s clumsy, partly because you can’t see all the screens at once, and partly because it’s difficult to move an icon from a location on one screen to another location several screens away.

Now, in the new iTunes 9, when you plug in your device, the software displays an exact visual representation of your iPhone or Touch screens right on your computer, and allows you to rearrange them with your mouse. When you disconnect, the new arrangement is retained on the phone. It worked fine for me.

In iTunes 9, you also can create up to 12 automated “Genius Mixes” from your personal music library — essentially personal radio stations consisting of songs iTunes considers to be related, that play on and on. I enjoyed this feature, and found it generally made good choices.

There are also a number of small visual improvements throughout the program. In the jukebox, for instance, you can now locate all songs by a particular artist using a Column Browser — an optional left-hand column that lists the artists.

In the store, categories like music, movies and TV shows are now arrayed across the top, with drop-down menus for genres. The store also is generally better organized, with richer graphics, more white space and easier navigation.

A small touch of social networking, not exactly Apple’s historic strength, has been added to iTunes. From inside the store, you can post a link to a favorite title to either Facebook or Twitter, though this of course serves Apple by encouraging others to buy the title.

You can now buy special albums, called “iTunes LPs,” that attempt to replicate the experience of old vinyl albums by including lots of extra material. For instance, for one such title by the Doors, iTunes delivered to me liner notes, digital scans of old posters and set lists, plus photos and video interviews. Another, called Mayhem, by the singer/actor Tyrese Gibson, includes just one song, but also a vivid digital comic book with voiced dialogue.

However, these iTunes LPs take up a lot of space on your hard disk — about half a gigabyte each for the ones I tried.

Overall, iTunes 9 is a nice improvement on a much-used program.

Find all of Walt Mossberg’s columns and videos online, free, at the All Things Digital Web site, walt.allthingsd.com.